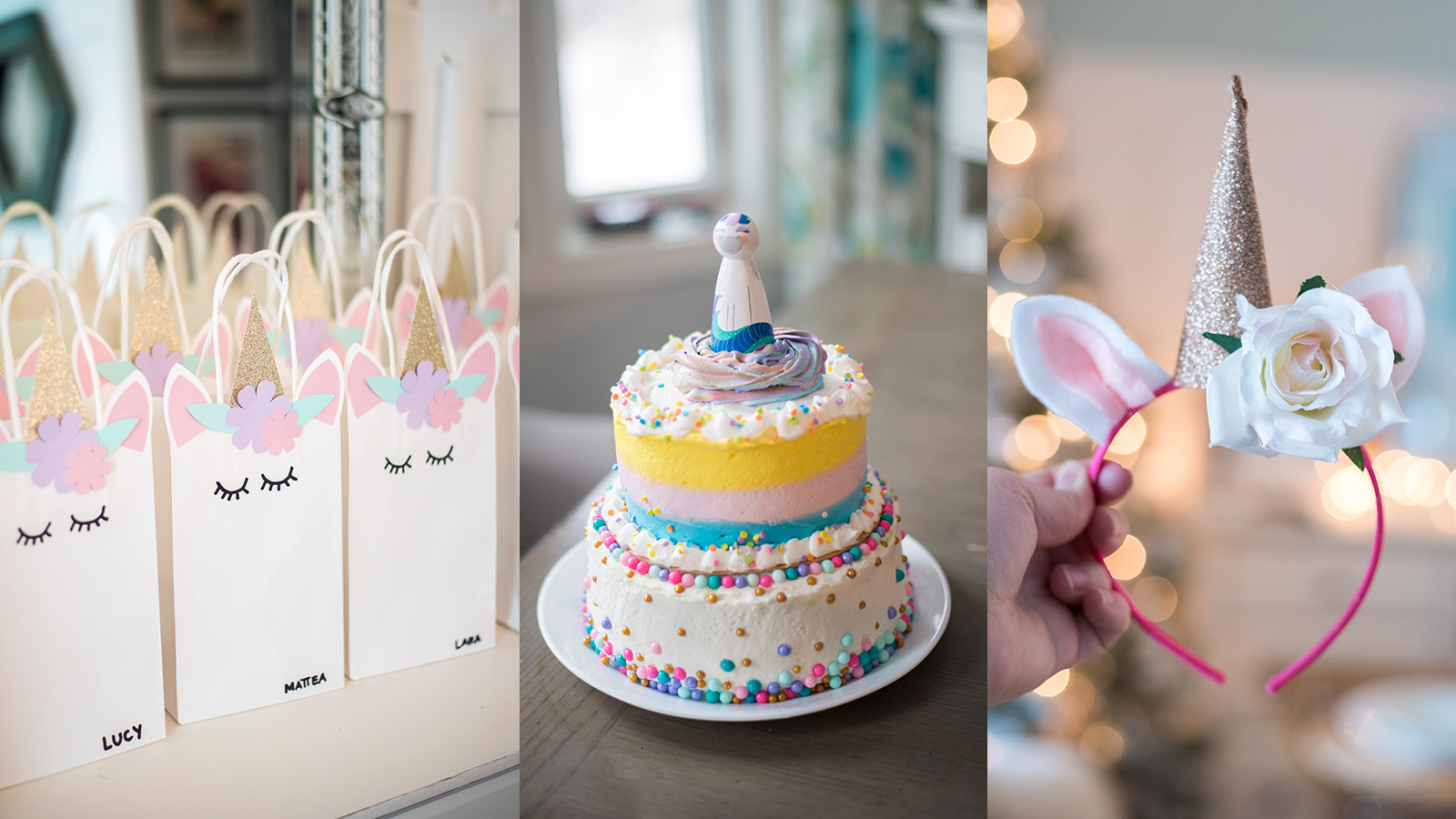 We had so much fun celebrating my middle daughter’s birthday this past weekend! I did a few fun DIY projects with a unicorn theme, and I thought I’d share them with you today. These unicorn treat bags, unicorn birthday cake and unicorn headband were all simple DIYs that everyone – especially the birthday girl – loved! END_OF_DOCUMENT_TOKEN_TO_BE_REPLACED 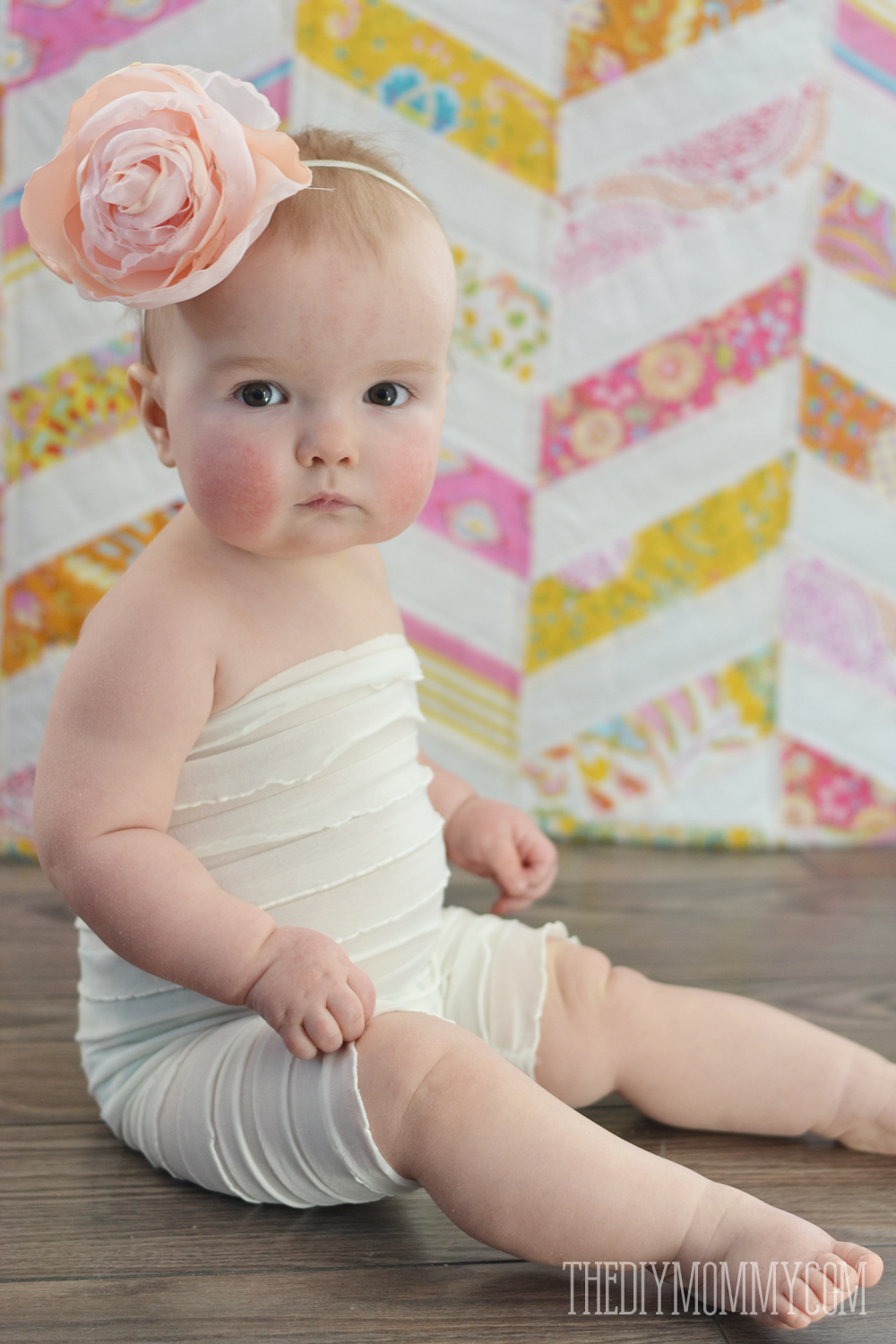 How to Sew an Easy DIY Ruffled Petti Romper

This past Saturday we celebrated Baby B’s first birthday. I’m still shaking my head as I type this and I’m wondering where this past year has gone. Wasn’t it just last week that I was bundling her up in a piece of ruffled fabric and taking her newborn photos? No, wait… that was LAST YEAR. It’s crazy. As I was feeling rather sentimental over the weekend, I found the strip of ruffled fabric that I wrapped my little newborn in and I transformed it into a ruffled petti romper for Baby B to wear for her first birthday photos. Then, I took some photos of her in front of the same quilt that I laid her on for her new baby photos. It was so sweet and so meaningful! END_OF_DOCUMENT_TOKEN_TO_BE_REPLACED

This past weekend, we threw a birthday party for Little A. She’s turning three, and we had been planning a Frozen themed party for quite some time. Like our Halloween costumes this year, I suggested other ideas, but Little A wanted what she wanted and I gave in. I was happy to hear that she wanted an “Anna” themed party as opposed to the more popular “Elsa” theme, so we had a lot of fun making decorations, favours, and foods that were the colours and feel of Anna’s costume.

We kept the party simple and sweet so that it was budget friendly and kid-focused. END_OF_DOCUMENT_TOKEN_TO_BE_REPLACED

Baby A turned 2 last month, and we had a super-fun party to celebrate! It was a “bake shoppe” themed party with lots of colourful, cupcake decor and toddler baking activities. END_OF_DOCUMENT_TOKEN_TO_BE_REPLACED 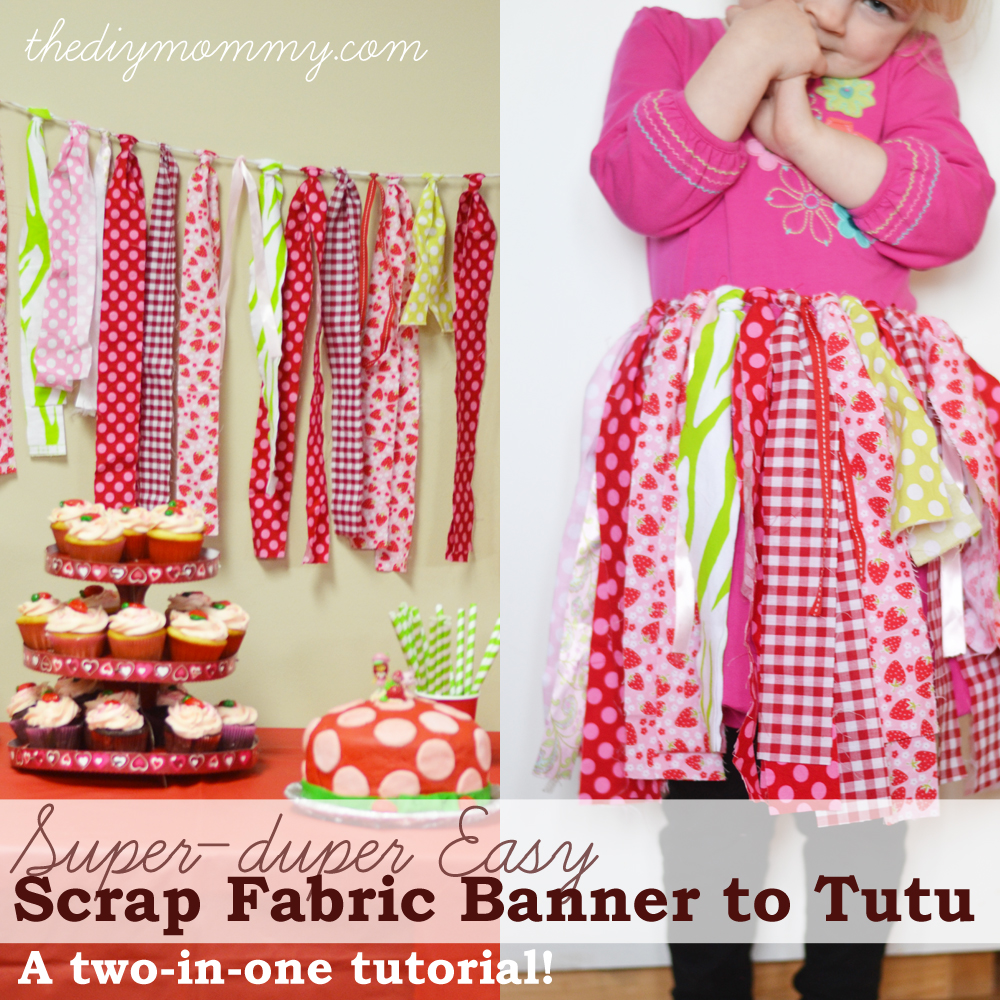 We had the most fun Strawberry Shortcake birthday party a little over a week ago that I made a simple scrap fabric banner for. It was so very easy to make, and I constructed it with an idea in mind. I wanted to re-use it as a fun dress-up tutu for my daughter!

This is a really simple, quick DIY project that requires no sewing and little material. You could use the banner as party decor, and then  upcycle it into a scrappy fabric tutu when the party’s over. It will be Little C’s Valentine’s tutu! 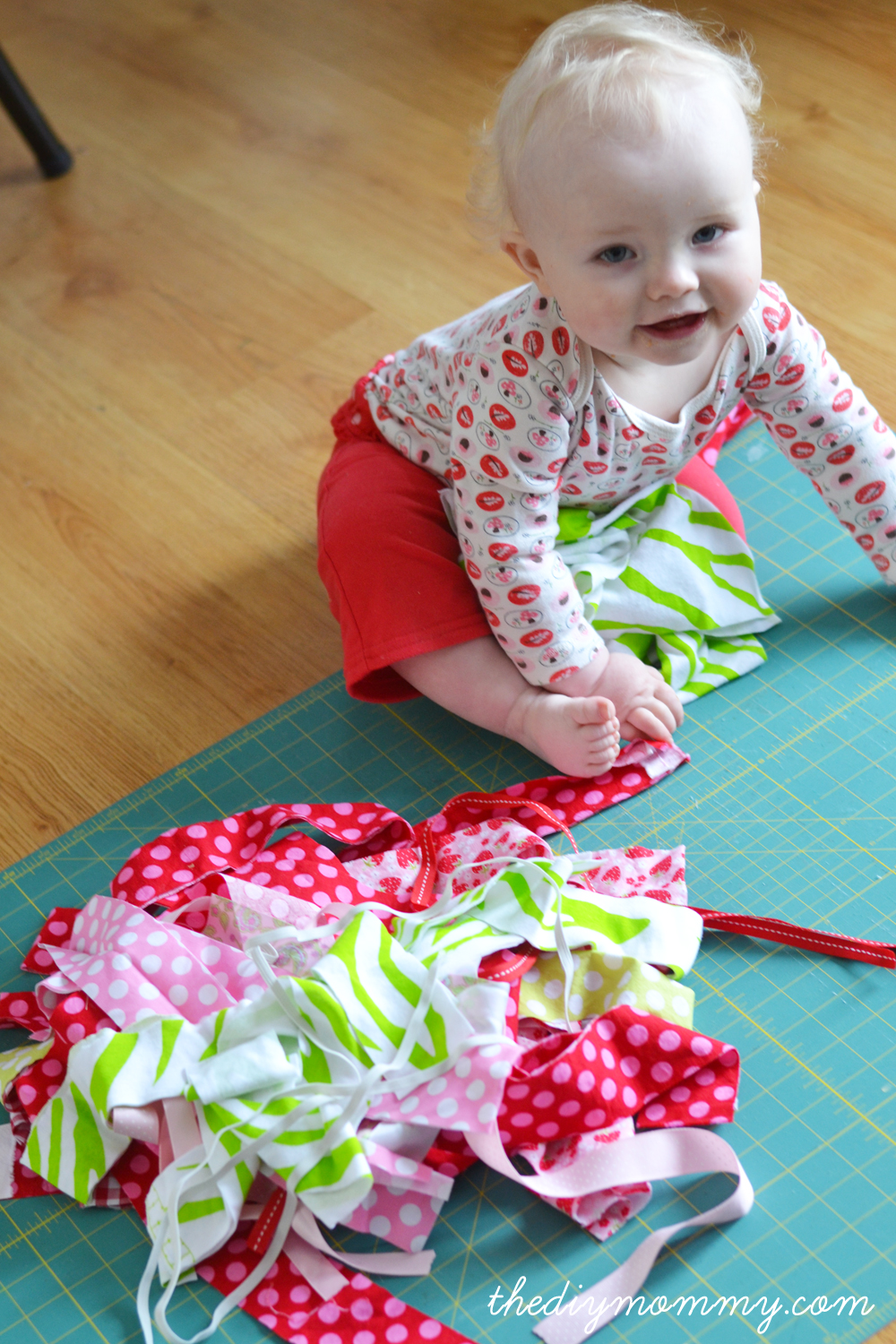 Cut about 30 strips of fabric that measure 15″ – 30″ long. I liked the look of different lengths of strips, but you could also make them all the same length. You can also cut some lengths of ribbon or lace to add some texture to the banner / tutu. Cut a piece of 1/4″ elastic that’s about 60″ long. 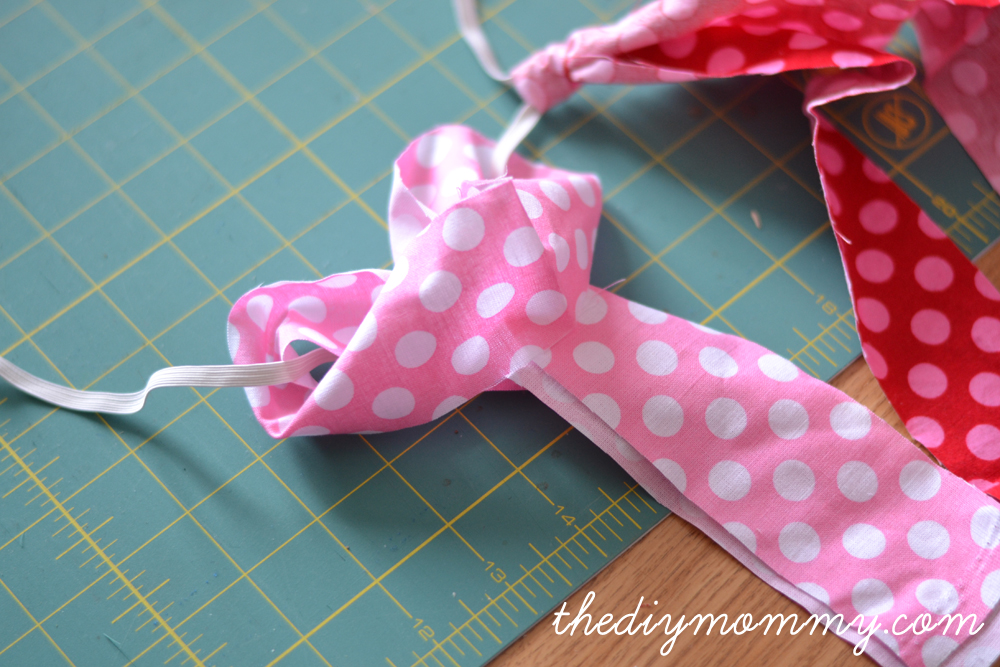 Starting about 2″ from one end, tie the strips to the elastic piece as shown above. Fold them in half with wrong sides together, and then turn the folded end over the elastic. Pull the other end through the loop created. 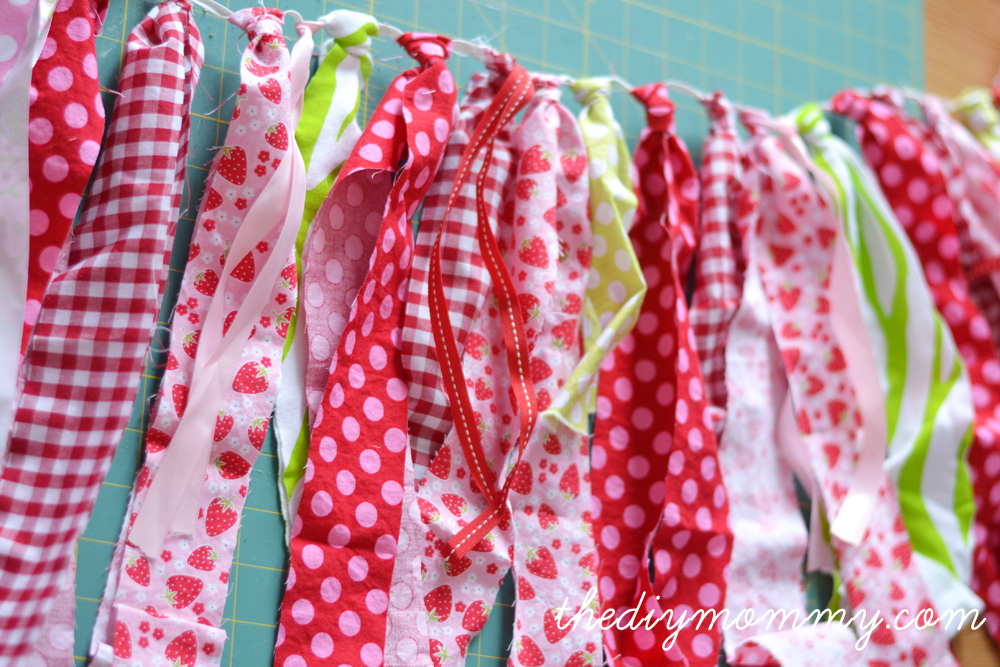 Continue tying strips onto the elastic in this manner, leaving about 2″ between each strip as shown. Tie bits of lace or ribbon between the fabric strips if desired.

Your scrap fabric party banner is done and ready to hang! This would also make a fun decorative banner for a baby or child’s room. 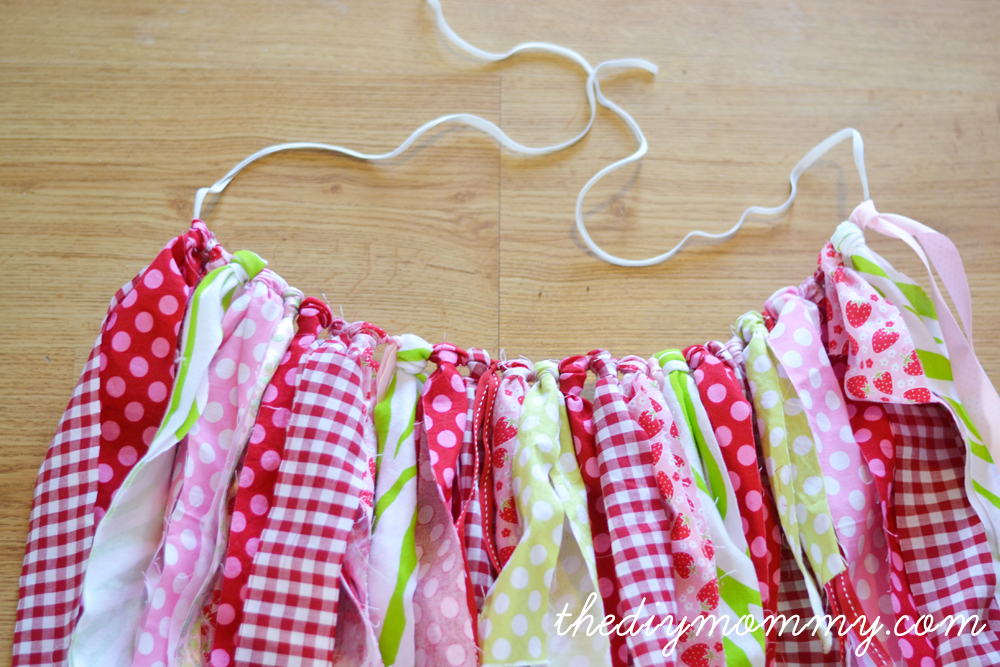 To “upcycle” the banner into a tutu, push all of the strips together as much as needed to match the circumference of your child’s waist (my daughter’s measurement was 20″). 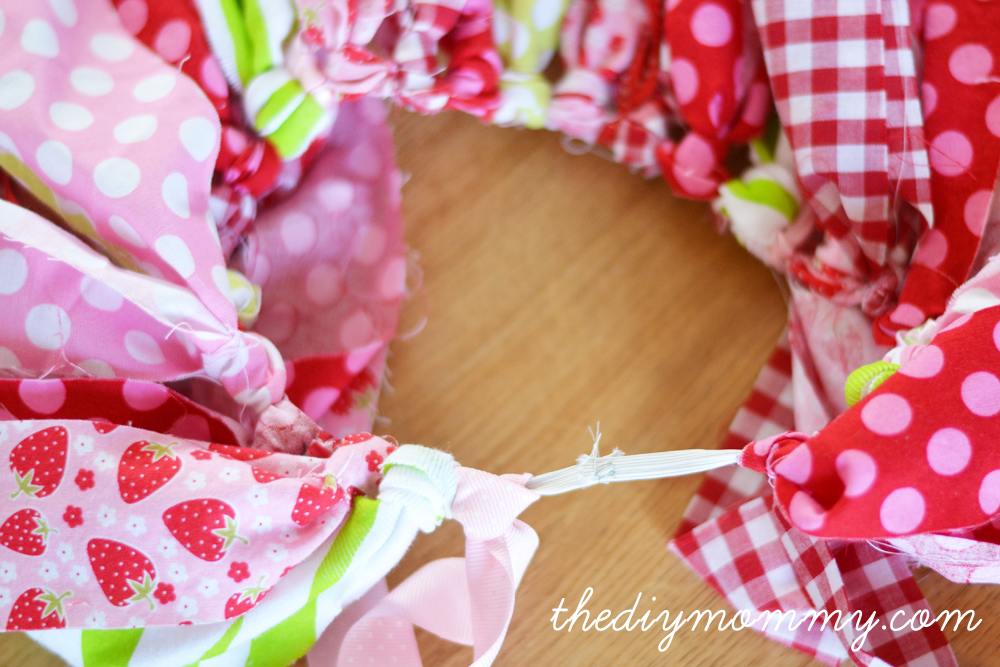 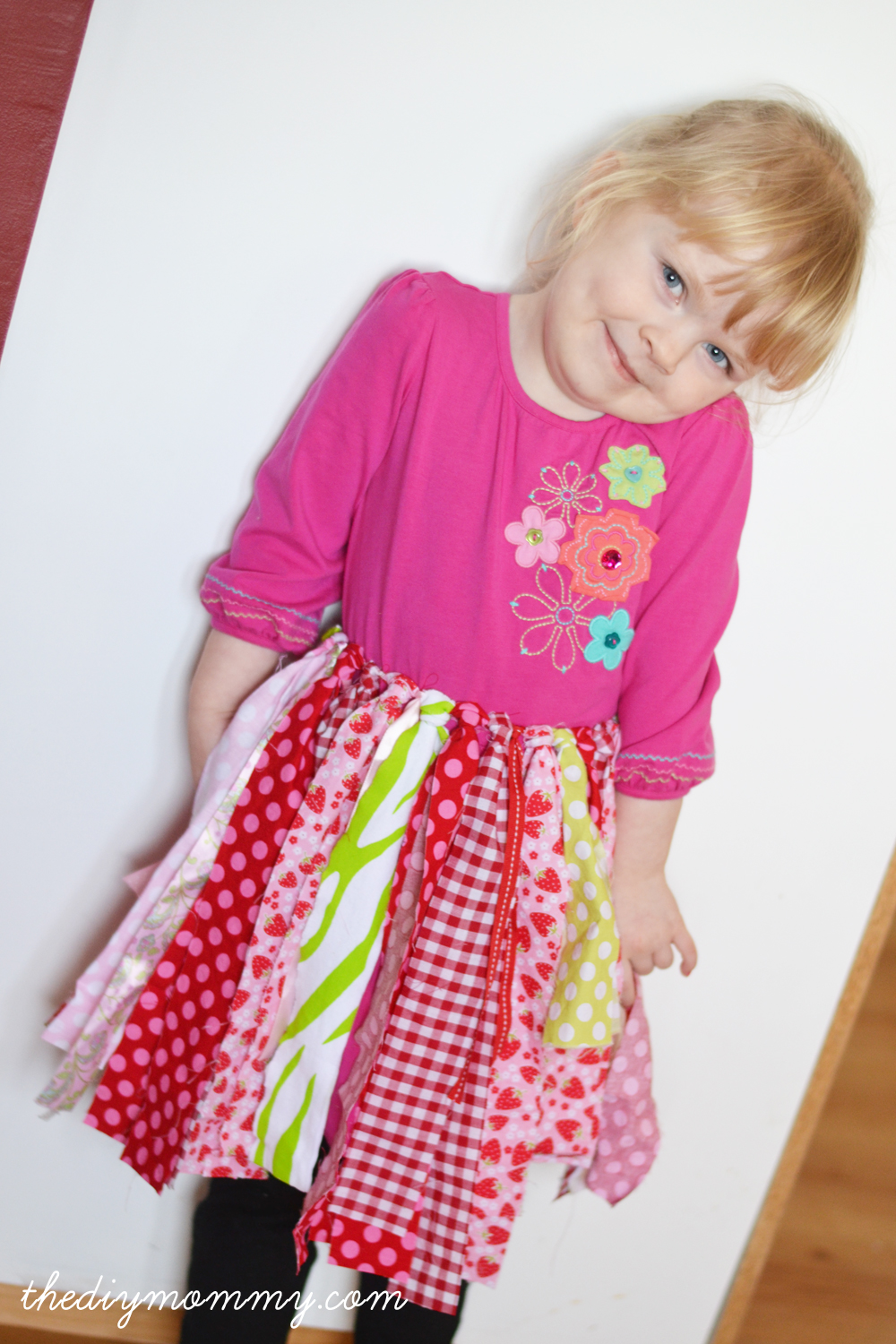 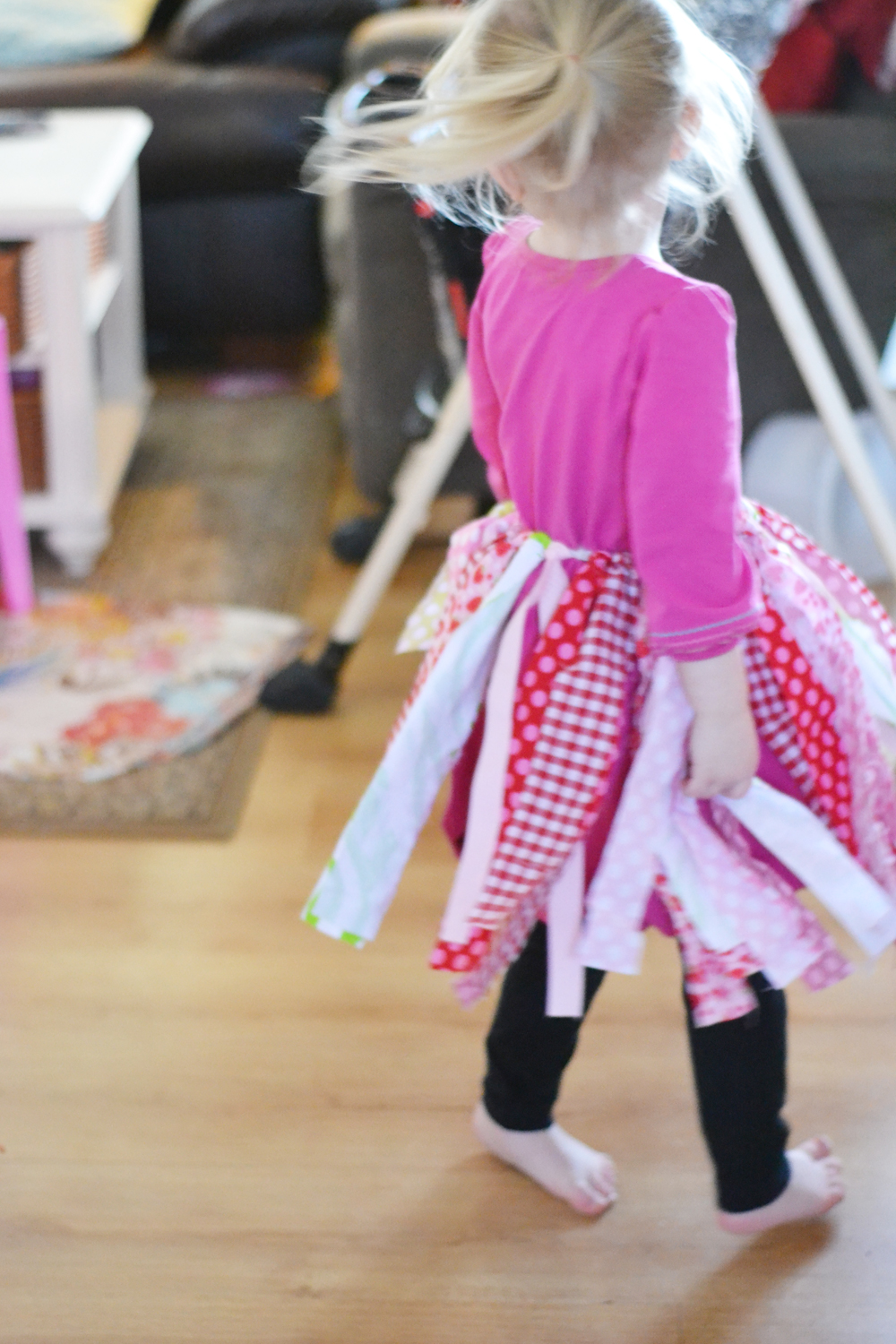 Now you have an adorable scrap fabric tutu that’s perfect to twirl in! 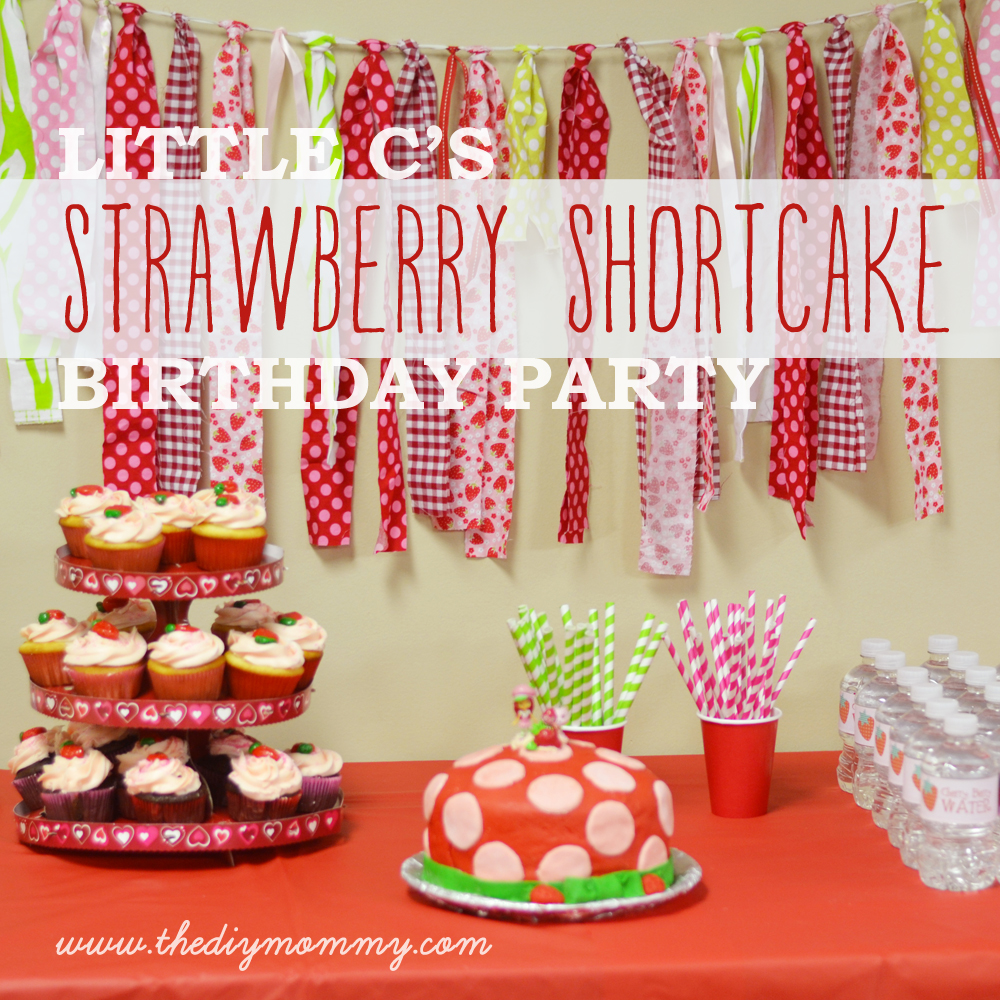 My oldest “baby” turned four on January 1st, and we had her birthday party this last Saturday. I’ve been throwing her birthday party a couple of weeks after her actual birthday because of the busy Christmas / New Year’s season, and she hasn’t minded (yet!).

This year, she wanted a Strawberry Shortcake themed party. She picked the theme back in June (yes, June!) and explained to me in great detail her vision for the event:

“I would like to look like Strawberry Shortcake, Mama, with red sparkly hair and a strawberry on my shirt.” 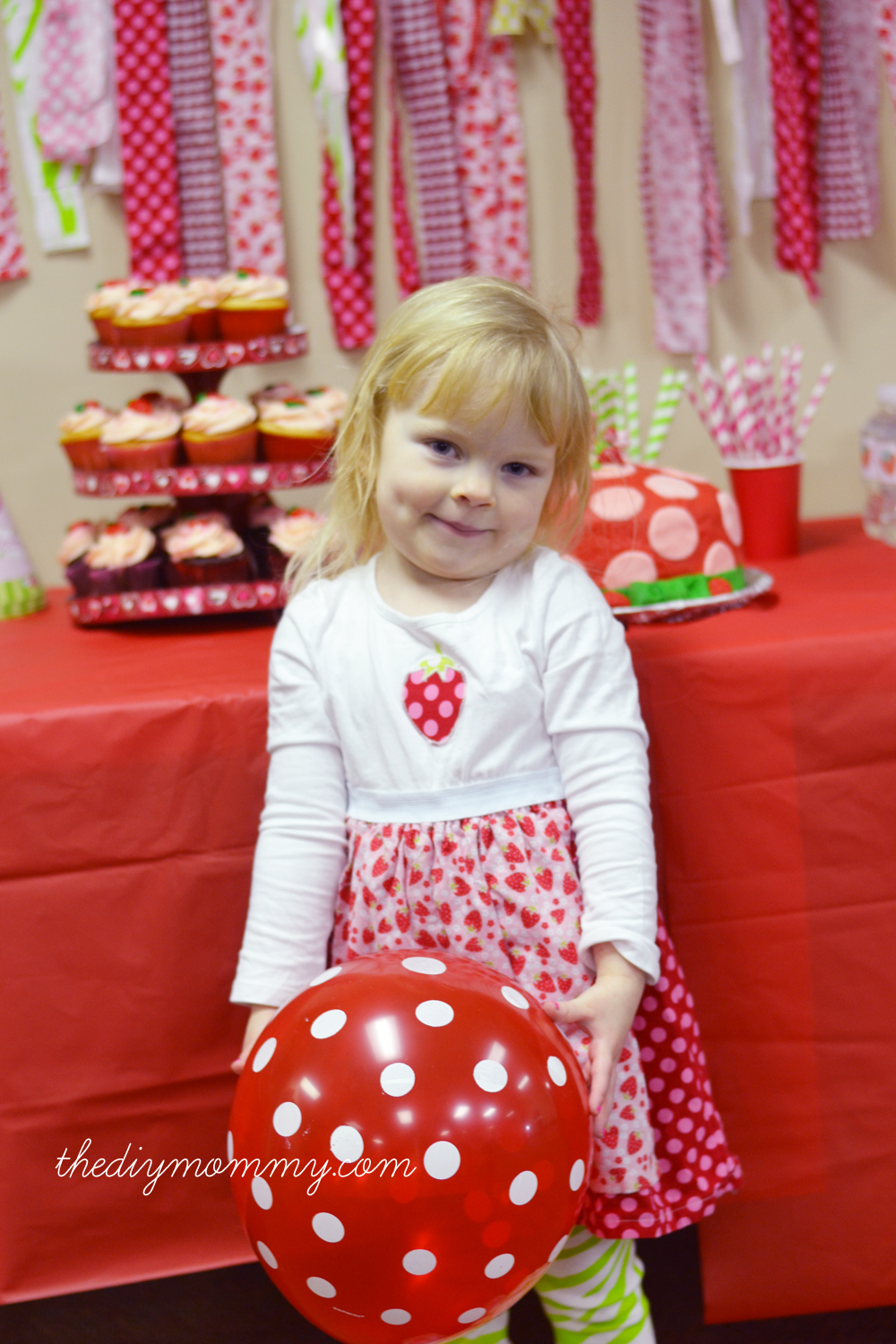 (I made this costume back in October – here’s the tutorial – and it did come with a “sparkly” red wig!)

“Can I please have cupcakes with roses and pink sparkles on them?” 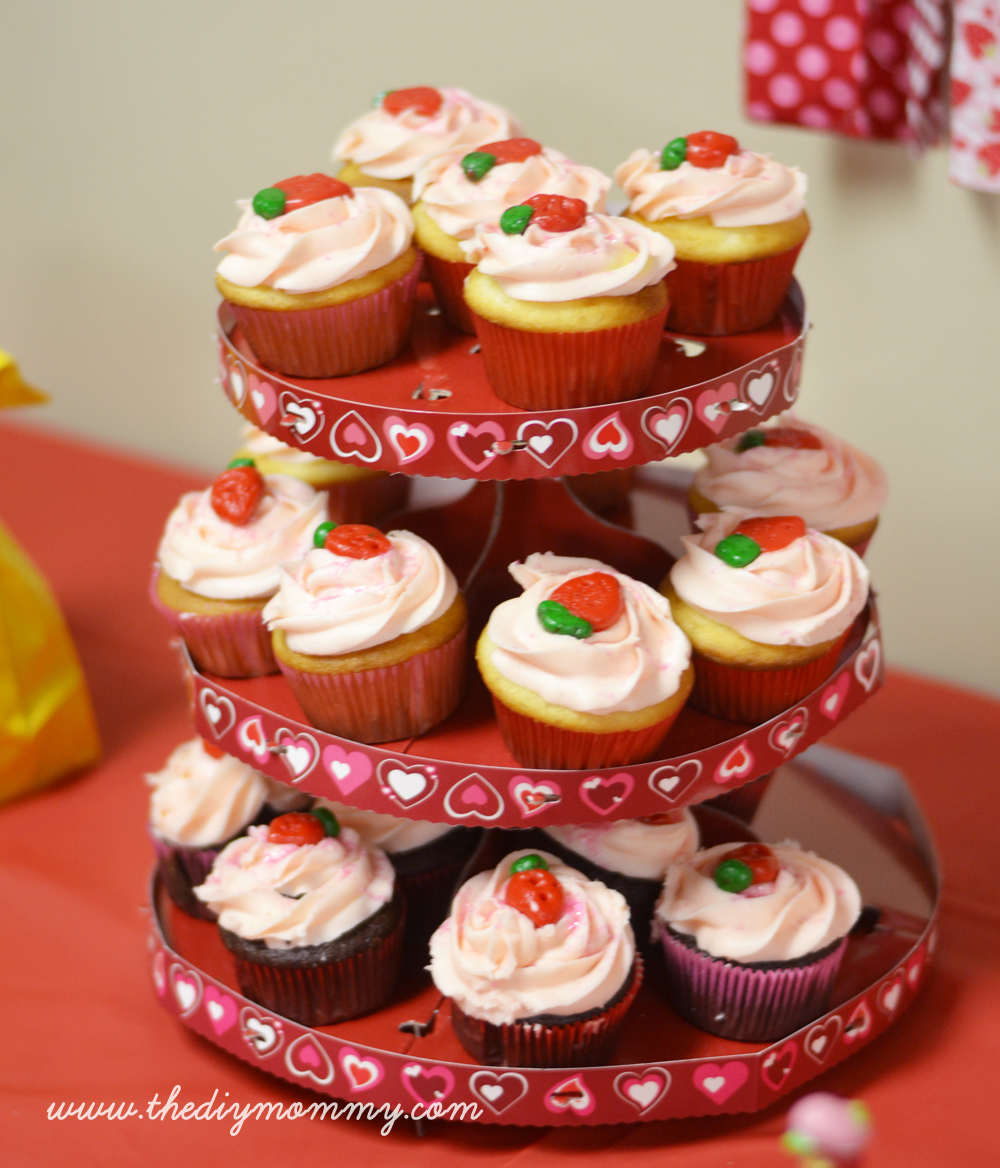 (The cupcakes were made with cake mix and iced with buttercream frosting. We made strawberries with homemade marshmallow fondant – they were basically just blobs of red with smaller blobs of green attached and we poked strawberry-ish holes in them with a toothpick. We completed these with edible pink sparkly sprinkles, of course!)

“For a cake, I want Strawberry Shortcake on top with her big skirt on the bottom. OK, Mom?” 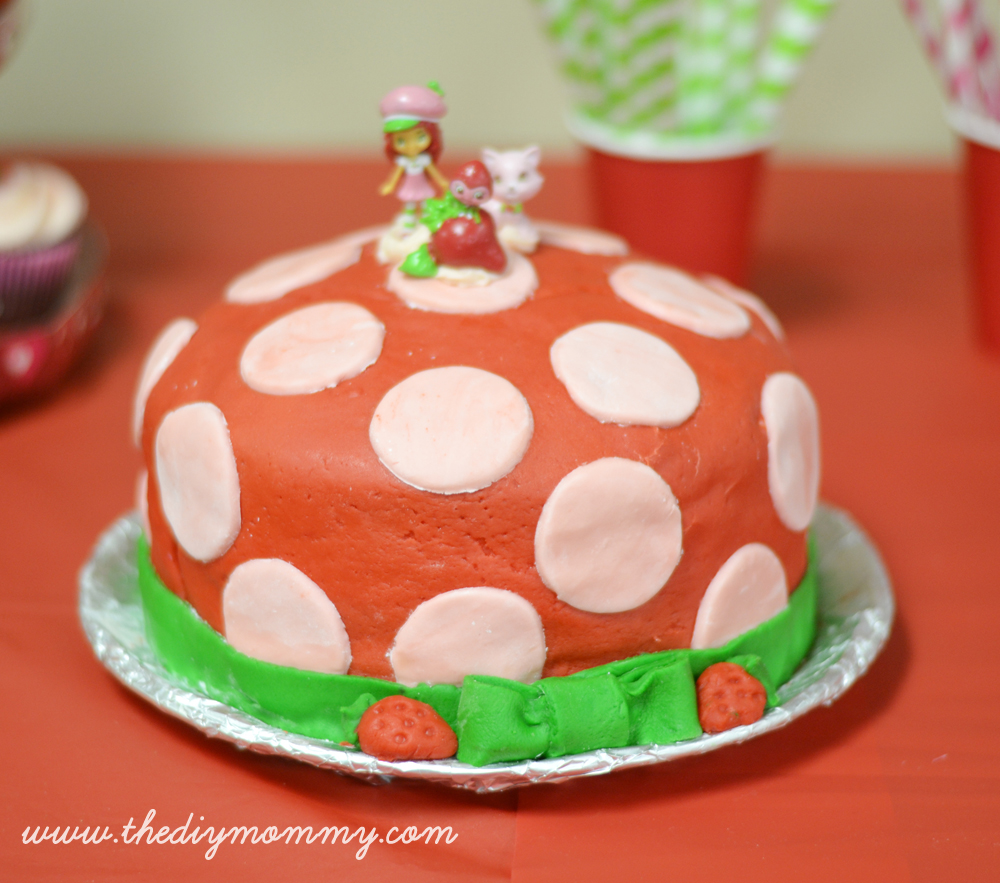 (As you can see, I used my Mom Powers to usurp the cake plan a little. I couldn’t bring myself to make one of those cake-bottomed doll cakes, so we came up with this polka-dotted fondant one instead.  I put some of her Strawberry Shortcake toys on top which made her happy!)

Side Note: Last year I swore I’d never try making marshmallow fondant ever, ever again. After looking at the price of pre-made stuff this year, I decided to hand make it AGAIN. It makes me so mad to work with! All goes well until I attempt to roll it onto the cake, and then it tears apart (this cake has a patch job). Any fondant tips from experienced cake makers out there would be so appreciated! 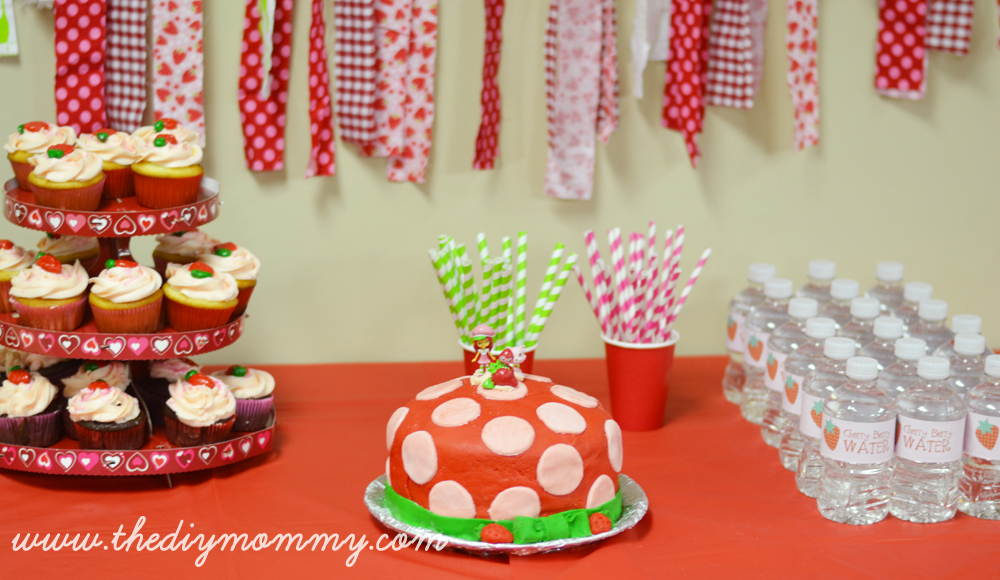 I made this fun fabric scrap banner simply by tying fabric strips around a piece of 1/4″ wide elastic (I have plans for it’s use after the party – I’ll share that with you this week), and I made custom labels and treat bag toppers that matched our berry theme. 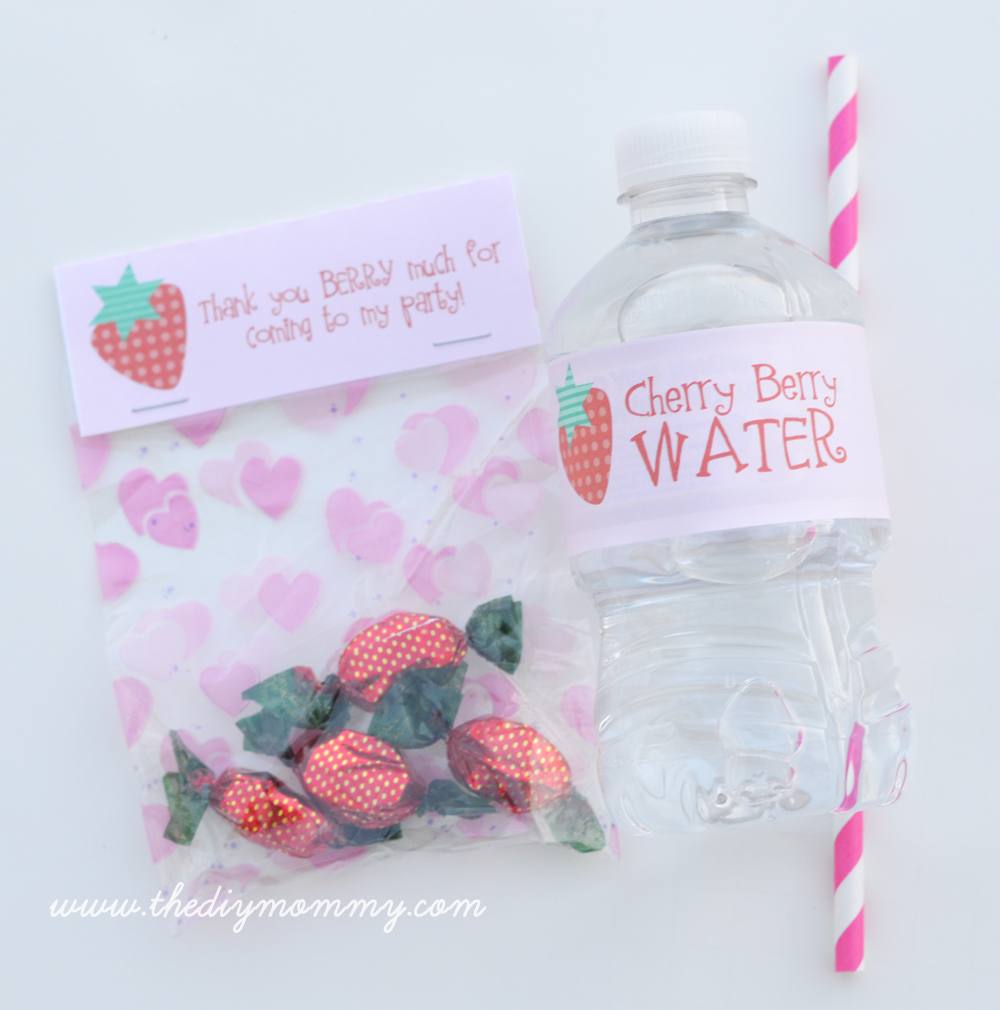 If you happen to throw a Strawberry-themed party, feel free to download these free printables for your personal use (make sure to print these PDF’s at full size): 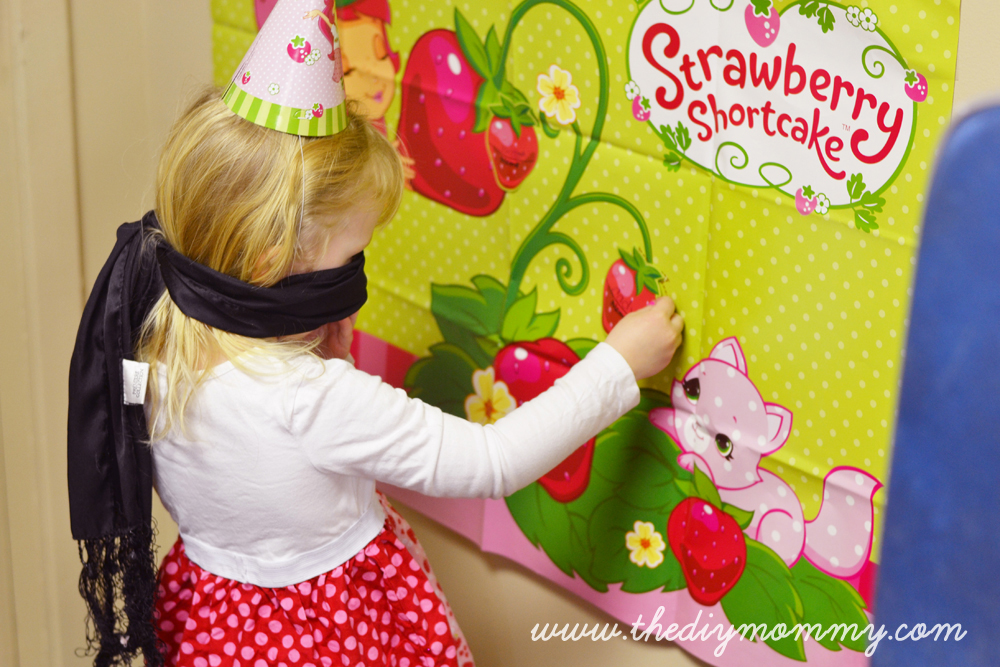 I caught Little C peeking ever so gingerly over her blindfold as she “just happened to” get the berry in exactly the right spot… What a girl.

Despite some relatively major oopses (like losing the candles, getting the pizza late, running out of hats and balloons…), my girlie pulled me in close as I tucked her in that night and said:

“Mama, that was the best party ever!”

And that made every little bit of stress and preparation worthwhile… even that impossible marshmallow fondant! 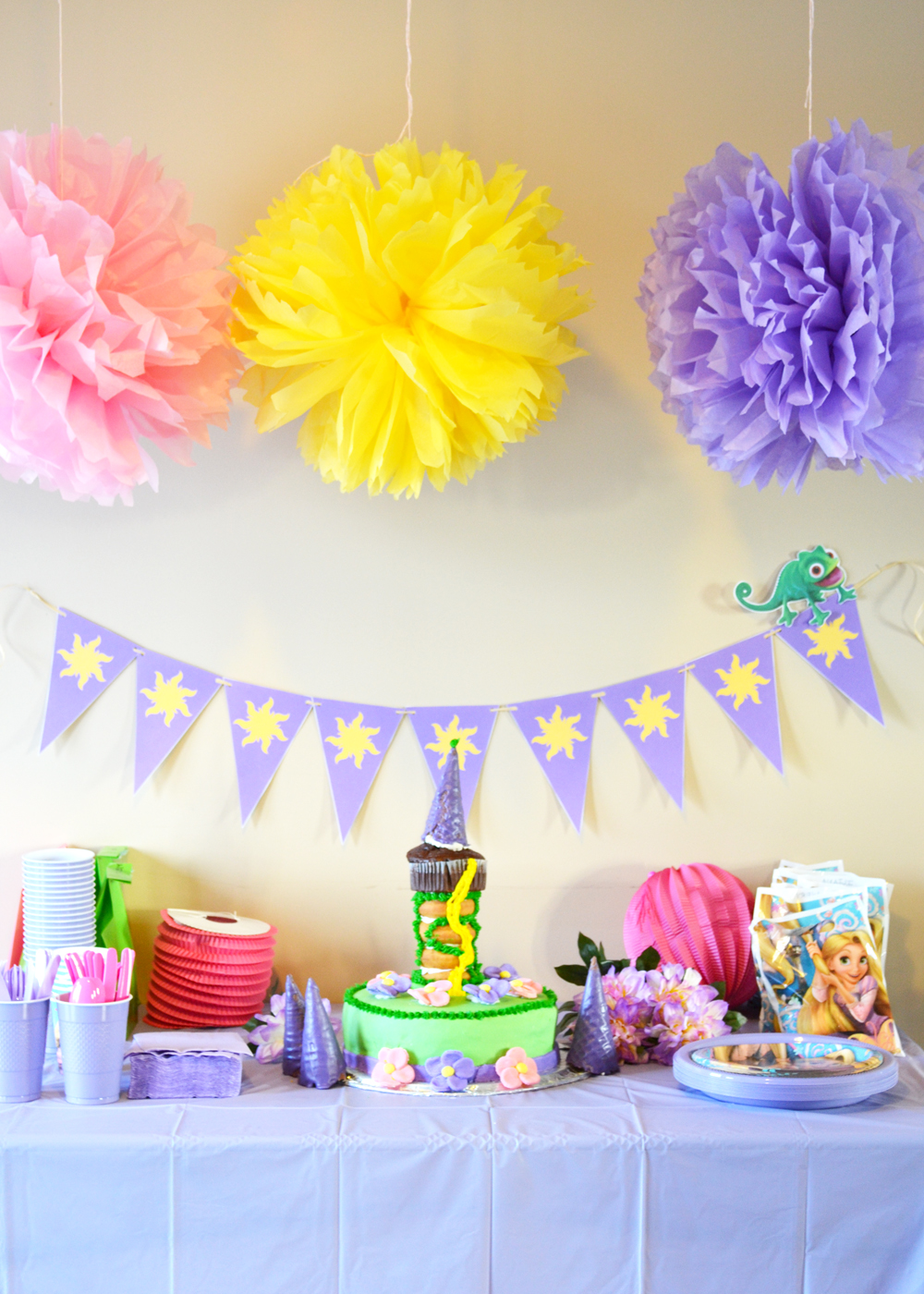 My oldest daughter turned three years old on January 1st, and she is madly in love with Disney’s “Tangled” movie. She is obsessed with all things “Rapunzel”, and loves to dress up in princess dresses and dance around the house. When I asked her what type of party she’s like, I listed a Rapunzel Party as an option and her eyes instantly lit up. That was the one!

Between Pinterest and some fantastic crafting blogs I follow, I managed to come up with a completely DIY Rapunzel-themed party for a low cost. It was a lot of work, but my daughter loved it!

Here is how I did it, and how you can too: 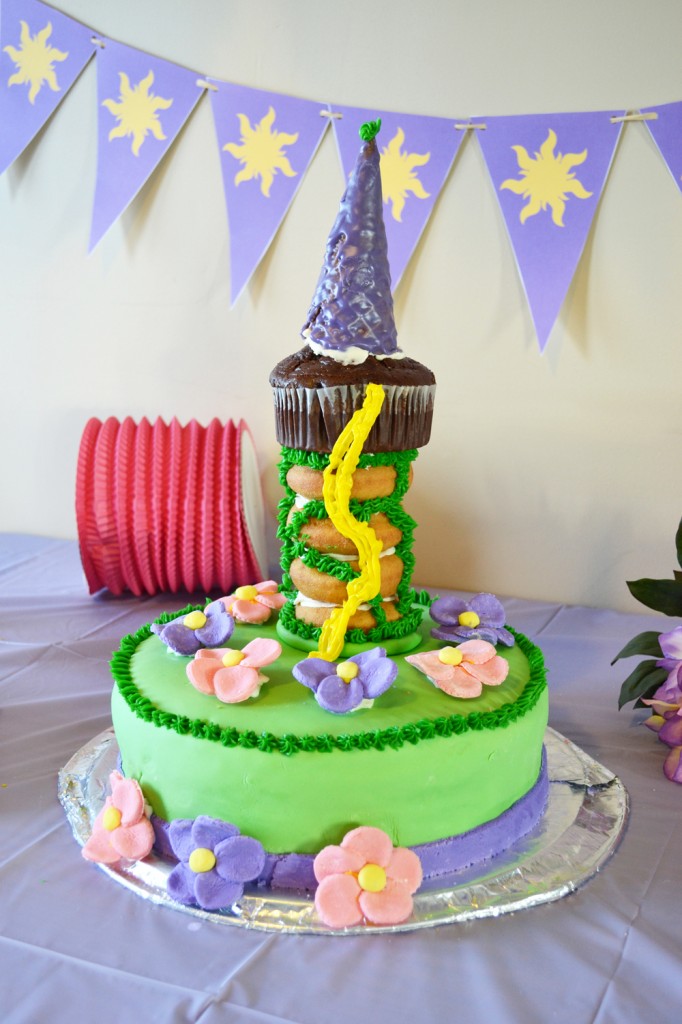 The cake was the most difficult part, and it was inspired by this cake, this cake and this cake. I started with rainbow bit cake mix, baked two 10″ round cakes and layered them with a purple buttercream icing. Then, I iced the entire cake in purple buttercream and made marshmallow fondant with this recipe. I personally had a difficult time working with the fondant (it was either too sticky or, when I added more icing sugar, it broke easily). I’m hoping it’s a skill that just takes time! I dyed half of the fondant green and put it over the cake, and then used a small lid to cut circles out of the remaining fondant that I had dyed purple and pink. I arranged the circles to create the flowers (I glued the petals together with buttercream icing) and rolled a small ball out of yellow fondant for the centers. I added a strip of purple fondant to the bottom of the cake and arranged the flowers in a semi-circle on the top of the cake.

Finally, I added green vines, yellow hair, and grass detailing to the cake with buttercream icing. Overall I was satisfied with the cake, though the tower fell after a few hours! I’d suggest some sort of dowel system to make it last better!

I kept the party decor relatively simple. I hung tissue paper poms in pink, yellow and purple from the ceiling over the cake table. My daughter and I had a great time making them together using this tutorial. (Bonus: We used them as decor in her room afterward!) We made a simple banner (like the one in the Tangled movie when they are in the market) out of paper and string. The printable template for the banner flags can be found here. My daughter saw the banner and instantly requested that a “Pascal” (the lizard from the movie) be perched on it, so we found a picture of him online and printed it and cut it out!

I had some paper lanterns from a previous party, so used those on the table, and we purchased some Tangled-themed treat bags and plates. 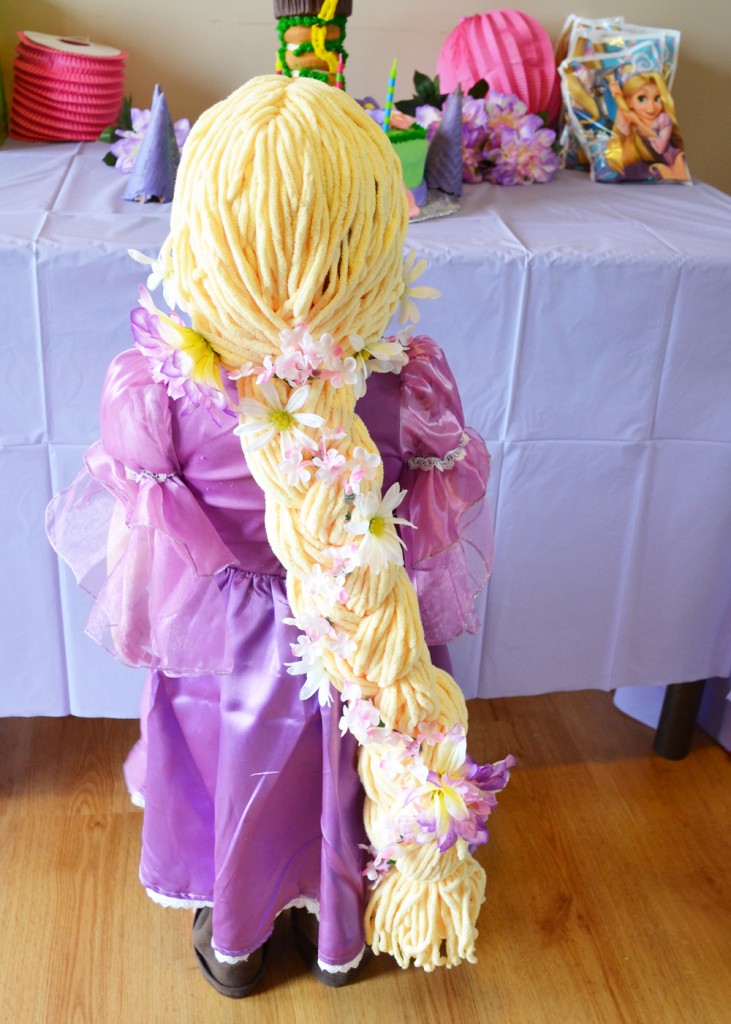 One of the first things my daughter requested when she knew she was going to have a Rapunzel party was a Rapunzel dress and hair! We found a dress to purchase online, but my very talented mother made a gorgeous Rapunzel wig using this tutorial. The yarn she chose was perfect – it was a buttery soft and fat acrylic in the perfect and softest shade of yellow. She glue-gunned flowers in the braid as a finishing touch. 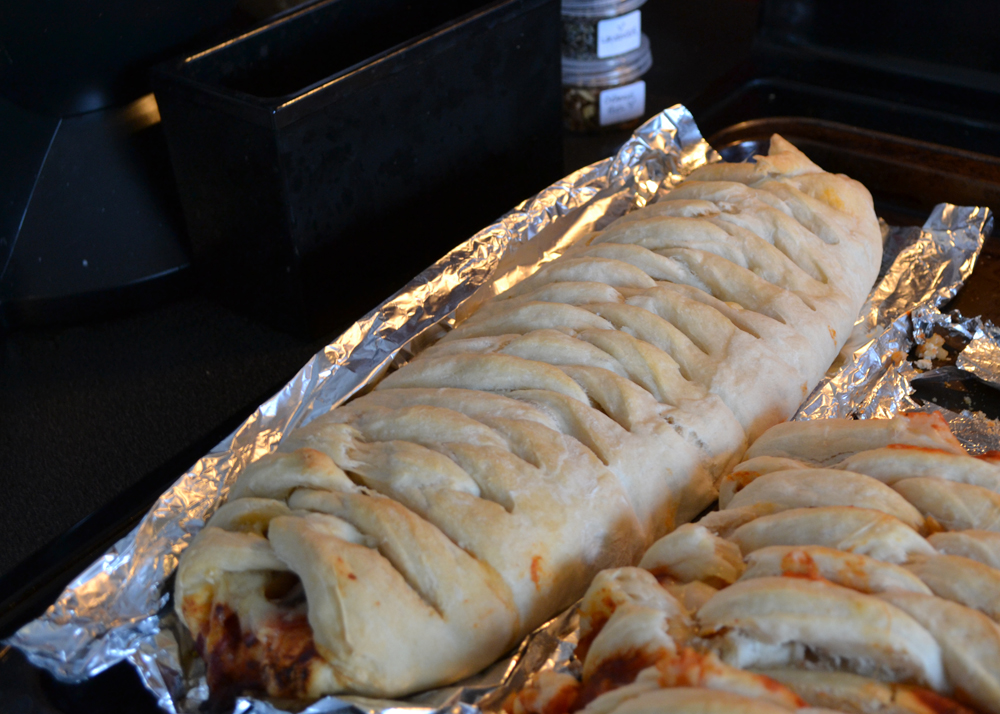 For the main dish, I had the idea to make these fun calzones that look like a Rapunzel braid! They were toddler-friendly and delicious. Rather than using a bread machine, I hand-made the dough the night before, let it rise for a couple of hours, put it in a large bag in the fridge, and then took it out the morning of the party. After it rose again for another couple of hours, I rolled it out, placed the filling in, criss-crossed the dough over the filling and baked them. In addition to the calzones, we had some simple veggie, fruit and cracker trays.

We had a wonderful, simple Rapunzel-themed party and my daughter had a great time with her friends (and we had a good, solid sleep afterward)!

http://www.robinsnestphotography.ca/blog/2011/07/20/tangled-birthday-party-day-brantford-photographer/
19 Comments
Close
We use cookies to ensure that we give you the best experience on our website. If you continue to use this site we will assume that you are happy with it.OkRead more